Home > What We Believe 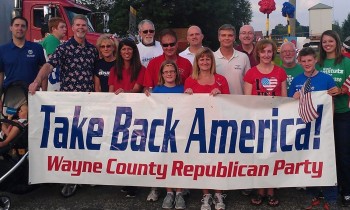 Today, that American Dream is at risk.

Our nation faces unprecedented uncertainty with great fiscal and economic challenges, and under the current Administration has suffered through the longest and most severe economic downturn since the Great Depression.

Many Americans have experienced the burden of lost jobs, lost homes, and lost hopes. Our middle class has felt that burden most acutely. Meanwhile, the federal government has expanded its size and scope, its borrowing and spending, its debt and deficit. Federalism is threatened and liberty retreats.

Providence has put us at the fork in the road, and we must answer the question: If not us, who? If not now, when?

That is the choice facing the American people. Every voter is asked to choose between the chronic high unemployment and the unsustainable debt produced by a big government entitlement society, or a positive, optimistic view of an opportunity society, where any American who works hard, dreams big and follows the rules can achieve anything he or she wants.

The American people possess vast reserves of courage and determination and the capacity to hear the truth and chart a strong course. They are eager for the opportunity to take on life’s challenges and, through faith and hard work, transform the future for the better. They are the most generous people on earth, giving sacrificially of their time, talent, and treasure.

This platform affirms that America has always been a place of grand dreams and even grander realities; and so it will be again, if we return government to its proper role, making it smaller and smarter. If we restructure government’s most important domestic programs to avoid their fiscal collapse. If we keep taxation, litigation, and regulation to a minimum. If we celebrate success, entrepreneurship, and innovation. If we lift up the middle class. If we hand over to the next generation a legacy of growth and prosperity, rather than entitlements and indebtedness.

As we embark upon this critical mission, we are not without guidance. We possess an owner’s manual: the Constitution of the United States, the greatest political document ever written. That sacred document shows us the path forward. Trust the people. Limit government. Respect federalism. Guarantee opportunity, not outcomes. Adhere to the rule of law. Reaffirm that our rights come from God, are protected by government, and that the only just government is one that truly governs with the consent of the governed.

The principles written in the Constitution are secured by the character of the American people. President George Washington said in his first inaugural address: “The propitious smiles of Heaven can never be expected on a nation that disregards the eternal rules of order and right which Heaven itself has ordained.” Values matter. Character counts.

We respectfully submit this platform to the American people. It is both a vision of where we are headed and an invitation to join us in that journey. It is about the great dreams and opportunities that have always been America and must remain the essence of America for generations to come.

May God continue to shed his grace on the United States of America.