Home > Who We Are > Scott Wiggam 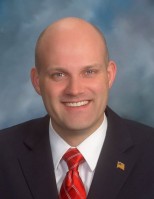 Scott Wiggam is serving his third term on the Wayne County Board of Commissioners. Since taking office he has worked toward a limited, more effective local government and has fulfilled his promises to the people of Wayne County through economic development initiatives, pro-agricultural policies, and conservative values.

Prior to his tenure as commissioner, Scott owned and operated a restaurant, managing full time, day-to-day operations with over 20 employees. He received a Bachelor's degree from Asbury College and a Master's degree in Political Science from the University of Akron. Scott served as a lead legislative associate to the U.S. House of Representatives for the Christian Coalition of America, Inc. Scott also served a four year, active duty tour in the United States Air Force and was honored with an Air Force Commendation Medal for meritorious service.

Since taking office, Commissioner Wiggam implemented conservative fiscal management policies that have helped to avert the need for tax increases. When sales taxes were last increased in 1993, local government spending grew an average of over 7% each year until 2005, despite average family incomes growing by only 3%. Since taking office in 2005, he has worked toward reducing expenditures by more than 10% in order to balance the budget. Commissioner Wiggam believes that keeping money in the pockets of the people is better for economic growth than higher taxes and rapid government growth.

Commissioner Wiggam served on the Wayne Economic Development Council. He fulfilled a campaign promise by forming a task force of representatives from Wayne County businesses in order to create a more business-friendly environment within local government. As a result of input from the task force, Commissioner Wiggam successfully authored the county's Enterprise Zone Guideline update, which encourages local and new business growth and investment, helping to create more, higher paying jobs.

Continued Support to Our Agricultural Base

Commissioner Wiggam worked to help implement the county's Agricultural Security Areas (ASAs) policy, which helps farmers protect their assets and increase their financial bottom line. Wayne County was the state's second county to adopt ASAs and currently there are several farms with over 1,500 acres applying for this designation.

In 2006, Commissioner Wiggam served as the chair for the Work Force Policy (Chief Elected Officials) Board which covers Wayne, Holmes, and Ashland County. During this time Wiggam stressed the mission of removing the barriers and helping the underemployed and unemployed gain economic independence. During his tenure, Wiggam worked to find flexibility in state and federal funding in order to enhance job skills and placements at local manufacturers. Commissioner Wiggam recommended Wayne Economic Development Council President Rod Crider to the Workforce Policy Board in order to increase the connection between individual job skills and local economic development.

Responsibility for the Environment, Infrastructure, and Wellness Program

On the environmental front, Commissioner Wiggam serves on the Board of Directors for the Joint Solid Waste Management District (covering Wayne, Stark and Tuscarawas Counties). He has worked to realign district funds in order to increase recycling in Wayne County. Residential recycling alone has grown over 13% since 2004 and Wayne County currently leads the District by having the greatest recycling accessibility. Wiggam helped to secure over $100,000 from the solid waste district in order to help compost debris in Wooster after the 2006 storm..

Commissioner Wiggam has helped to implement Wayne County's wellness program, which benefits over 900 local government employees and their families. Statistics have shown that such initiatives have reduced employees' risk of disease and have increased the overall health of the workforce. This experience has help him to gain a better understanding of the challenges facing families and businesses today in providing and accessing health care and he will continue to work toward removing those barriers. Ultimately, the county's wellness program will reduce health care costs and save taxpayers money.

Scott Wiggam is a strong advocate for community involvement and service. He has served on the Wooster Area YMCA Board. He has also served on the Triway and Wooster Soccer Association Boards and coaches youth soccer. Wiggam is an active member in the County Commissioners Association of Ohio and organized the Association's 2005 Summer Meeting in Wooster. Wiggam is member of the Wayne County Farm Bureau, the National Rifle Association, The Heritage Foundation, and the Ohio Township Association.

During his time in college, Wiggam served in several overseas missionary roles. In 1993, Wiggam traveled to Calcutta, India and served in Mother Teresa's Home for the Dying and Home for the Mentally Disabled. He is active in the ministries of the Shreve United Methodist Church where he serves as a member.

Scott is married to Katie (Cochran) and they reside in Wooster with their three children, George, Calvin, and Lauren.