Home > Who We Are > Latecia Wiles 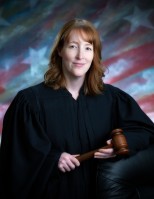 Judge Latecia E. Wiles grew up on a farm near Creston, Ohio. After graduating from Norwayne High School, Judge Wiles put herself through the College of Wooster where she earned her Bachelor's of Arts degree and the University of Akron where she earned her Juris Doctorate. During this time, Judge Wiles worked for the Wayne County Clerk of Courts, Wayne County Adult Probation Department, Eberhart & Buytendyk law office, and the law office of William Anfang, III.
In 2004, Judge Wiles was appointed an assistant prosecutor for the Wayne County Prosecutor's Office where she prosecuted child abuse and neglect cases in the Wayne County Juvenile Court.
In 2006, Judge Wiles was assigned to the civil and appellate divisions of the Prosecutor's Office and began representing many other county governmental officials including the sheriff, auditor, treasurer, commissioners, and township trustees, to name a few. During her time in the Prosecutor's Office, Judge Wiles handled numerous appeals in front of Ninth District Court of Appeals, the Ohio Supreme Court, and various federal courts. She soon became certified as an appellate law specialist by the Ohio State Bar Association. In 2011, Judge Wiles became supervisor of both the appellate and civil divisions of Prosecutor's Office. This same year Judge Wiles was also selected to receive the 2011 Meritorious Assistant Prosecuting Attorney of the Year award from the Ohio Prosecuting Attorneys Association and was appointed interim Prosecuting Attorney for Wayne County for a short time upon the retirement of Martin Frantz.

As a prosecutor, Judge Wiles worked closely with the former Probate and Juvenile Court Judge, Raymond Leisy, to create the Wayne County Volunteer Guardianship Association to address the needs of the mentally incompetent in Wayne County and served on the Association's board.